By increasing your typing speed, you could significantly boost your codingproductivity. Here are two tools you can use to help you with that. About the author: Saikat Basu (makeuseof.com) is a techno-adventurer in a writer’s garb. When he is not scouring the net for tech news, you can catch him looking for life hacks and learning tidbits. You can find him on LinkedIn & Twitter watching over the world. MakeUseOf is a technology website, focused on bridging the connection between users, computers, devices and the Internet through education. Feature image courtesy of twinsterphoto via Bigstockphoto.

Do you use two fingers to type a line of code? And all the while you look down at the keyboard? That won’t do. In the modern bullpens for geeks, speed is a survival skill. Typists don’t need to be programmers. But programmers need to be typists.

The next time you sit down to type a line of code, think about the pause created by the hunt for a symbol on the keyboard. The interruption is just as bad as an unwelcome phone call. I know you will get better at it. But there is a way to boost your typing speed while programming right now.

General typing tutors focus more on the alpha-numeric keys, but a coder wears out the symbol keys just as much. The programmer needs a different kind of a typing tutor. The two here will take you through many typing drills. Start practice.

All Typing.io practice lessons are there to help you get your accuracy and speed right. Even keyboard virtuosos might see a small dip in their words-per-minute when challenged by the symbol keys. The lessons include the keys you need for some of the popular programming languages. Choose yours and start typing.

There are 16 languages to choose from. The lessons explore a variety of Open Source code — from Objective C to your own choice of code which you can upload and practice with. Type over the code and any error turns red. The tutor won’t teach you programming but will help you get familiar with different coding IDEs.

Sign into Typing.io with Google and pick the Free plan or the Mechanical Plan. The paid plan has an interesting Typo Cost Analysis which reveals the approximate “cost” of your typos on productivity.

So far, this new typing tutor for programmers is free to use. The ads are a distraction but then the developer must pay for it somehow. SpeedCoder covers ten programming languages. The code samples are sourced from GitHub repositories. You have the flexibility to upload your own code for practice. 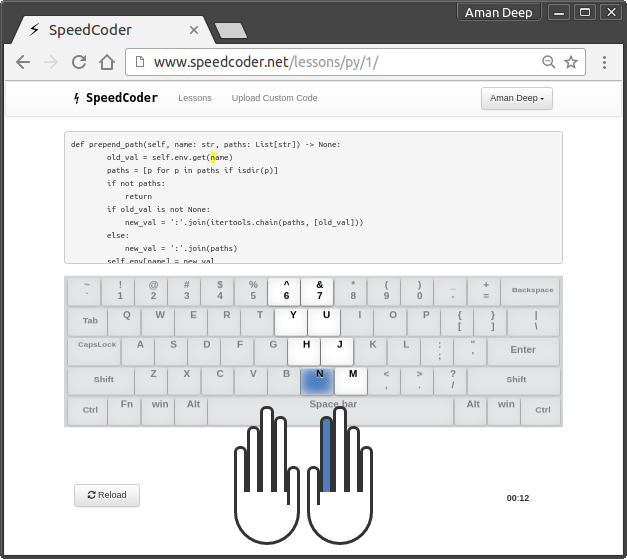 SpeedCoder is new. It lacks a tutorial section now. But do look forward to the features as they are introduced. The developer has promised new keyboard layouts like Colemak, Workman, and AZERTY. A tutorial section will also be added soon.